So, let's try something new.

Alternate History Weekly Update, a former blog run by Matt "Mitro" Mitrovich, used to run a couple weekly segments called "Map Monday" and "Flag Friday," as does other Alternate History groups and blogs online. That said, I feel like joining in, and promoting timelines from the Alternate History world.

So my first one is from the Alternate History Wikia, "Acts of Union" by user "Feudy McPlagueface." 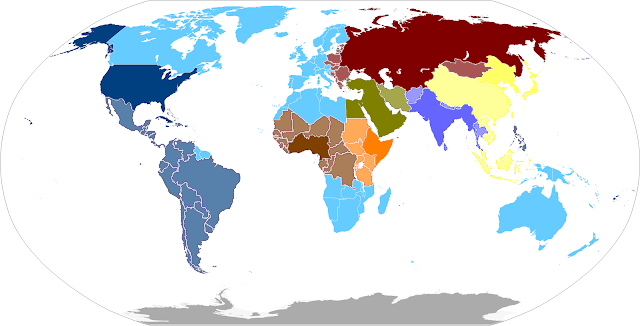 After a crisis in Venezuela turns into a shooting match between the British and American fleets in 1902, with the US Navy emerging victorious, the British Empire begins to reform, turning into a more de-centralized, federal state. By the current day, the world is divided into major factions: The Western Defense Pact (the US, Brazil, and Mexico); the European Commonwealth, composed of the the United Commonwealth (the British Empire) and the French Union; the Moscow Pact with the USSR, Great Bulgaria, People's Republic of China and Siam; the Great East Asian Union with the Japanese Empire, Indonesia and Vietnam.

The map is very interesting, though I would need to go over the timeline a few times more myself before I can determine if it's plausible or not. Having so many "space filling empires" slightly different shades of colours does make it seem rather suspect, but it's interesting and worth a look!