Flag Friday: The Many Unofficial and Proposed Flags of Canada

I'm not always about Alternate History, as many should know by know. Real historical things, places and events can be just as interesting as timelines we make up, and often is a great leaping off point for AltHistorians. Often, proposals and "unofficial" things can be made official, and tell a brand new story.

Case in point: Canadian flags. Before the Maple Leaf flag was declared official, Canada used a series of unofficial flags, some more unofficial than others, and almost all of them were modified Red Ensigns, to proudly proclaim that Canada was still a loyal member of the British Empire.

That said, here are a few of the unofficial designs for flags that were flown (or almost suggested) at one time or another. 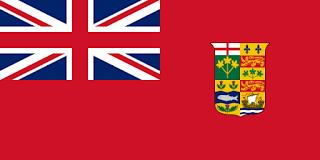 This was the first official unofficial flag was simply the British Red Ensign (used by the British Merchant Marine) "defaced" with a shield composed of the Coat of Arms of the four original provinces. From top left clockwise: Ontario, Quebec, New Brunswick and Nova Scotia.

But as the years went on and more provinces joined Confederation, the number of spots on the shield went up, starting with Manitoba in 1870, complete with the uber-Canadian maple leaf wreath and very British crown on top... 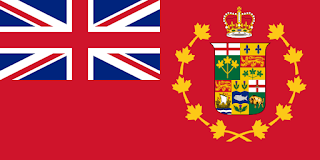 ...to the addition of a white circle background that nearly took up the entire flag in the 1880s after BC and PEI joined... (this design was dated to 1891 when BC adopted its current coat of arms) 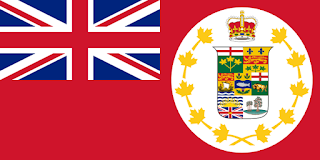 ...until 1905, when Alberta and Saskatchewan entered, and got rid of the white disk, the maple leaf wreath and the crown. And, frankly, it's a mess. Imagine getting school aged kids to draw this in a bought of patriotic furvor! 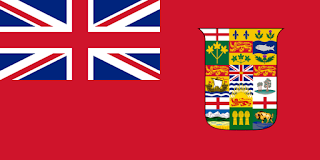 But finally, in 1921, the Canadian government, unofficially, adopted this version. This version pays homage to the four "founding" nations of Canada: England, Scotland, France and Ireland. And, being the time frame, it also left out the First Nations people. That would never fly today, but this is the version that flew the longest, from 1921 to 1965, with a slight change in the 50s to make the maple leafs at the bottom red instead of green. 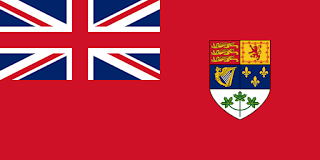 Personally, I have a soft spot for the Red Ensign, and not just because maybe secretly I wish to see the British Empire rise and rule the world again. But, rather, I see it from a historical point of view: this flag, variations notwithstanding, the one that Canadian soldiers fought World War One and Two under. There are issues with it, namely in that it prioritizes four European nations (and, in fact, with the Union Jack it represents England, Scotland and Ireland twice) as the "founders" of Canada. A modern version would have to find something else. My personal vote would have been a Red Ensign with a maple leaf of some kind, like this: 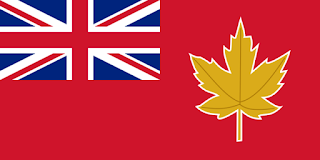 And finally, two other proposals:

The "Pearson Pennant" proposed by Prime Minister Lester B. Pearson in 1964 to encapsulate the motto "From Sea to Sea" (and worthy of any alternate Canadian flag, I say) 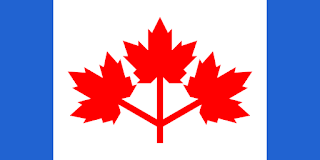 And the "Unity Flag" first made in 1995 during the second Quebec Referendum, with the Blue representing the proportion of Quebecers in Canada. Though, I honestly would feel a bit insulted if all I got was a couple narrow blue bars but, hey, Quebec remained in Canada then (by a squeaker), so maybe it worked. 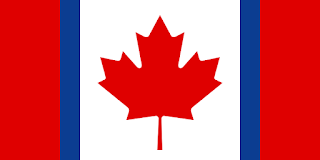 I plan to do Flag Friday's more often, and maybe with some flags designed for Alternate History scenarios. So if you have a flag you want to suggest, message me on Twitter (@tbguy1992) or email me at tbguy1992@gmail.com.
Posted by Tyler "tbguy1992" Bugg at 9:28 PM