A while ago I talked about my timeline on the AltHistory Wikia, French Trafalgar, British Waterloo, and some of the things I would change in it now. However, I like talking about it, even though I haven't done as much as I should have in the past few years to expand it. But soon I plan to get back into it. Not going to let eight years of work go to waste!

And for today, since this is, according to many an Alternate Historian, Flag Friday, I want to talk about some of the unique flags I made over the years for the countries in FTBW, and the brief histories I made for them. I'm not going to go into a huge amount of detail, and if you want to know more, follow the articles that I link. Going to do one a week though, so I don't overload you guys! 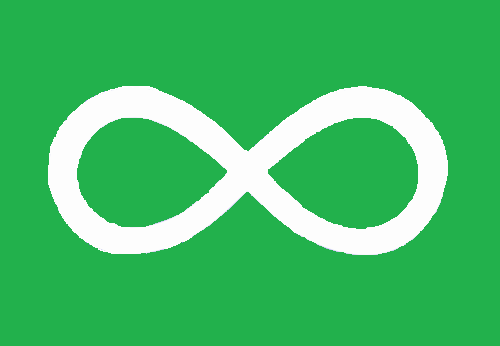 This is one of my favourite creations I've ever made in anything. Assiniboia is a country in North America, covering most of what is now Manitoba, Saskatchewan, Alberta, the Northwest Territories, Nunavut, and the western half of Ontario. It was founded by Native groups, namely the half native/half European Metis, lead by Louis Riel, with the help of the US in the 1870s, taking over the vast Rupert's Land of the Hudson's Bay Company to make their own nation. This was to prevent Canada from stretching from sea to sea (in this TL, not only had the US been divided in two by an ATL American Civil War, but it was prevented from expanding to the west because of the British who took over half of the Louisiana Purchase in a failed War of 1812). It becomes a mixture of European settler colonies, Native and Metis confederacy, British Westminster and American Republic in government. It's biggest industry for decades was agriculture, and increasingly resource extraction and transport, the capital Winnipeg becoming a huge railroad transport centre, connecting Canada, Alyseka and the US together.

Assiniboia is a long time ally of the US, and later of the Russian colony turned republic of Alyseka, the so called "Triple A Alliance," and sided with the US in numerous wars, including the Second and Third Global Wars (ATL's First and Second World Wars), and though a small, thinly populated country, Assiniboian soldiers were identified as some of the bravest and strongest in North America. In the 1930s, as the Great Depression roared through the world, the Assiniboian government took a gamble and invited movie studios north. While it didn't solve the crisis, the combination of low taxes, cheep labor, and vast open spaces quickly made Assiniboia the premier entertainment center in the world, with over 75% of English language films in the world being made by studios headquartered in Winnipeg, Brandon, Wascana (OTL Regina) and Calgary. President Tommy Douglas lead the nation through the horrors of the Third Global War, and for years modernized the country, bringing in universal healthcare and other welfare programs, while re-orienting Assiniboia to being an independent voice in the world stage: Allied with the US, but able to work with around the world. The US relied on Assiniboian diplomats and services so much that the Ministry of Foreign Affairs was often called the "US Department of State, Northern Branch."

Today Assiniboia is a wealthy, social-democratic nations member of the Organization of Sovereign Nations (ATL UN) and the Juneau Pact (anti French and Japanese Democratic alliance headed by the US and Russia), with a strong cultural and economic influence on the world, especially when the oil sands was discovered in the Athabaska region. While only having a bit less than 13 million people in the last election, Assiniboia is recognized as one of the richest and most influential "middle powers" in the world.

As for the flag: the Green background represents the vast land, agriculture, and prosperity, while the white infinity symbol has several meanings: the belief that the Metis people, and Assiniboia, will go on forever, as well as the two circles being joined represents the unification of two peoples, Europeans (especially the French and English) with the First Nations that lived in North American before hand, in peace and harmony. Mostly. Blue and Red versions of the flag are in existence, with red Metis that served with the Hudson's Bay Company as traders and trappers, with the red standing for those that served with the rival North West Territory.

But what do you think? Is Assiniboia basically my version of a "fan wank?" Or if you have a topic or idea you would like me to talk about, please leave comments below, email me at tbguy1992@gmail.com, or tell me on Twitter @tbguy1992.
Posted by Tyler "tbguy1992" Bugg at 8:00 AM