How the United States of American Finally Collapsed

The final collapse of the United States of America in 2004 was the death knell of Capitalism, as forecasted by Marx, Lenin, and Gorbachov. The problems of America were many: those that owned the means of production where too rich, and used their wealth to control the government to pass laws that directly affected the workers. Unions were stripped of their power, the "welfare net" was destroyed, and jobs were shipped overseas to countries that didn't care to provide satisfactory wages or even safe working environments. The greed and fear of the wealthy lead to the collapse of the system, as the rich head ate the poor legs that sustained it, the arms that defended it, and attacked their own heart, the belief in their ideas of democracy, until soon nothing was left.

The President Ronald Reagan, an actor and lunatic who sought to destroy the few small socialist ideals of the US, such as their Social Security and the unions, was the first to face the wrath of the people, being killed by Hero of the People John Hinckley Jr., who was then gunned down by the bodyguards of the corrupt tyrant. The Vice President, Herbert Walker Bush, tried to continue the policies of his predecessor, but was defeated in the election of 1984. The next few Presidents were ineffectual: George McGovern, Walter Mondale, General Norman Schwarzkopf, Jr., and the Christian "Televangelist" Pat Robertson lead the nation deeper and deeper to ruin, the failing of the old American system. Elections that prized speeches and personality to policies and ideas lead to a worsening government. The Congress couldn't agree on anything. The success of the Persian Gulf War, which the USSR and other nations helped participate to overthrow the dictator Saddam Hussien (and later led to the General being elected as a "war hero," though his army didn't even enter Iraqi territory until Soviet troops were already besieging Baghdad) was a short lived victory, as the economy stagnated, and the "voodoo economics" of tax cuts to the wealthy to trickle down to the poor continued to fail, but the insanity of the system led to the government of the rich, with no care for the poor and downtrodden workers, continue to cut taxes for the richest.

The Revolution began in the American province of Michigan in June 1999, as a strike by workers at the auto factory owned by the Ford family turned violent, and the National Guard that was sent suppress the fighting was fired upon by angry workers, who, due to the idiocy of their Constitution, was allowed to keep powerful weapons that could be used against the state, and soon a full scale battle broke out. Other cities, like New York, Los Angeles, Chicago, and Atlanta also faced the brunt of riots and fighting. President Robertson, blinded by his devotion to the Christian Bible, sought to destroy the workers, and so sent in the army, a violation of "American ideals" now ignored. But the workers would not be suppressed easily. The American people, shocked at what was happening, were divided between themselves on supporting a corrupt, inefficient government or aiding the poor workers and laborers, and more and more people began to support the oppressed.

The fighting was brutal, and long. The United Nations, the one place that symbolized peace in the world, had to flee New York City as the jewel of the oppressors, Manhattan, was set to the fire. Soldiers, shocked at the conditions of the poor, and furious of their government, began to defect to the workers. The Liberals who sought to aid the poor also joined the movement, the blinding ideology of American Exceptionalism torn from their eyes, aided the Revolution. But the rich, the powerful, the ideologically blinded, the easily swayed, remained on the side of the Tyranny of Pat Robertson, who used the war to declare himself President without an election. The Soviet Union and the People's Republic of China, seeing the plight of the downtrodden, sought to aid them by declaring war on the US, and landing troops and supplies and weapons to the resistance. NATO sought to respond, but without the Americans to prop them up, they were quickly defeated in battle in Germany and Italy. The US Navy, rocked by the same revolution as the American people, was unable to withstand the Soviet Navy, and they retreated, with the President and his lackeys, to the American province of Hawaii, where they remain to this day.

The fighting was long and brutal as brother fought brother, son fought son, entire families were torn apart. But by 2004, the reactionary forces of the corrupt, decadent US finally surrendered. The rich capitalists tried to flee to Canada and Mexico, but both nations, propped up by American power for so long, also faced revolution, and many were killed or retreated further, to Australia and South Africa.

NOTES: This will be a new series I will try, mostly with scenarios that I want to explore, but don't want to go into super long details of how they would go. I tried for weeks to write this article, but I just couldn't think of a good enough POD, and then how the changes would occur afterwards. So, I decided to not focus on that, and instead write a POV of the fall of America.

There are most likely a lot of problems with this scenario, but I didn't have the time to cover everything. That's what a TL on the AltHistory Wikia is for, after all. But, I know I didn't talk about Culture, Africa, the Middle East, or really explained why the US finally went for a communist revolution besides a few details. And, tbh, I feel it works best that way. This is what a through-fully indoctrinated Communist American would write about how their nation had fallen, as history is shaped by the victors to glorify the successes and increase hatred of the defeated capitalists.

Anyway, I hope you enjoy! GLORY TO THE UNION OF AMERICAN SOCIALIST STATES! 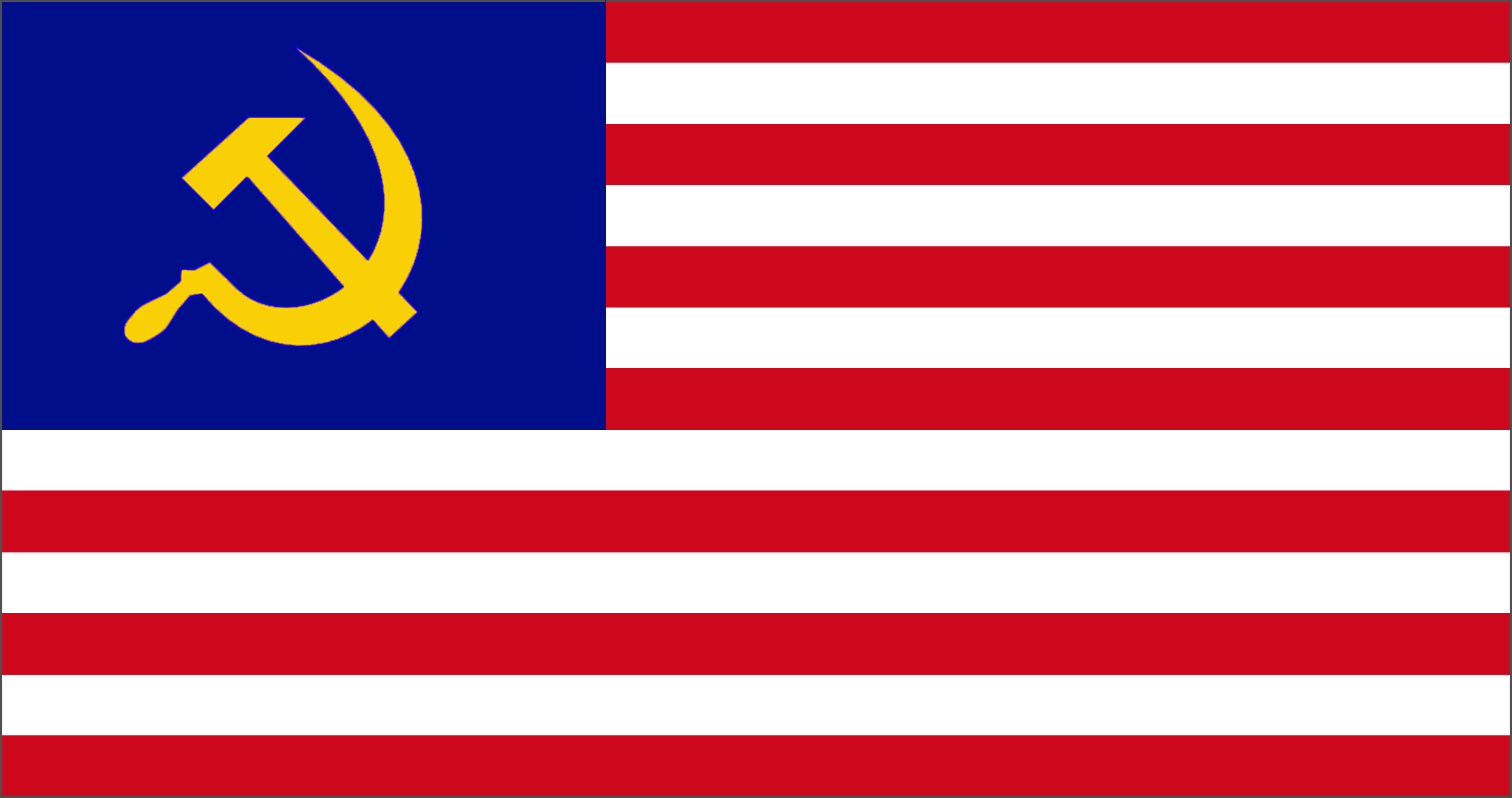 But what do you think? How do you think the United States would fall to the Red Menace? Or if you have a topic or idea you would like me to talk about, please leave comments below, email me at tbguy1992@gmail.com, or tell me on Twitter @tbguy1992.
Posted by Tyler "tbguy1992" Bugg at 11:50 PM