The other day, I asked on the Twitters and Facebooks what an American flag without Stars and Stripes would be like.

Well, frankly... No one knows. You could take one or the other off, but not both, it seems. But over all, most Alternate American flags are a variation of stars, stripes, red, white and blue.

So, here's my version. 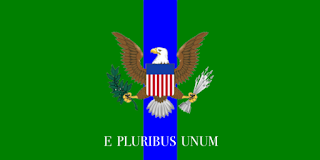 The green is supposed to represent the boundless land of the US, while the blue is for the Mississippi and other rivers which unite the country. A simple eagle from the Great Seal, and the motto of "E Pluribus Unum" at the bottom, could possibly be removed.

I'll be honest, looking back at it just an hour after making it, it's so-so. Yes, I got rid of the stars, but the stripes in the shield are still there. But I like the idea of an eagle in the centre.

I guess the main thing is that, really, anything can be made into a flag. I just wish that people would try to make something other than stars and stripes when making America in Alternate history.

So what do you think? What would your American flag without stars or stripes look at? Leave a comment or send me a message on Twitter, @tbguy1992.
Posted by Tyler "tbguy1992" Bugg at 5:07 PM