It's another Flag Friday! (Mostly because I have nothing else planned at the moment).

Therefore, I want to look at another flag that was made for one of my timelines, this time the Danube Confederation in my AltHistory Wikia TL, One Day in Sarajevo. 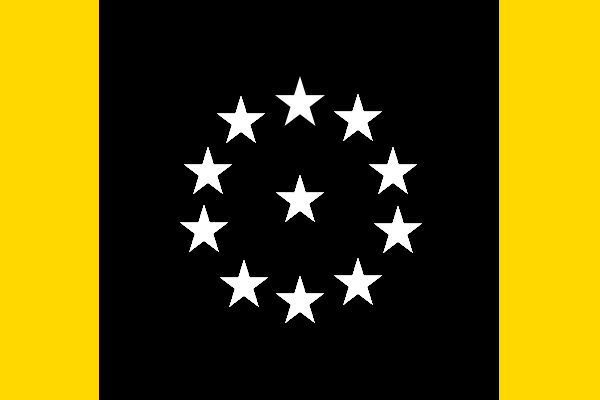 The Danube Confederation is a majorly reformed and rebranded Austro-Hungarian Empire. With the POD being that Archduke Franz Ferdinand is not assassinated, and his uncle, Emperor Franz Joseph dies in 1915 instead of 1916, Franz becomes the new Emperor. However, his prickly personality, especially against the Hungarians (and his support for the other nationalities in the Empire, such as the Slavs and the Czechs) lead to the break down in the 1917 Austria-Hungarian Compromise, the separation of Hungary from Austria, and the outbreak of Civil War. Russia, wishing to see their Balkan rival dismantled, supports Hungary, while Kaiser Wilhelm II supports the Austrian portion, and it inevitably leads to a full scale European War. Germany, with a few years to patch up relations with Britain is able to convince the UK to stay out of the war (not invading Belgium helped) and Britain having just dealt with an Irish Insurrection, was in no shape to go fight in Europe. Still didn't help Germany much, as the Kaiser's indecision of what to do, and the military's confusion without the Schefillen plan to guide them in a war, lead to the French invading and occupying Germany territory in Alsace-Lorraine and crossing the Rhine River.

Emperor Ferdinand, taking the opportunity that the war, has the Imperial Parliament, minus the rebellious Hungarian members, to pass a series of laws granting equal rights and national assemblies to ten of the most important nationalities in the Empire: German, Czech, Slovak, Ukrainian, Croatian, Serbian, Romanian, Polish and Slovenes, with the Hungarian national assembly not officially being founded. These new assemblies are given a large amount of power, and representatives in the Imperial Parliament. Emperor Ferdinand retains his title, and in June 1918, the Danube Confederation is declared into existence.

The troops that the various national assemblies raised are put under a unified command, which is also placed under combined German-Danubian command. With this reorganization and morale boost, Austria is eventually triumphant in the Civil War, and plays a large part in fighting Russia and Italy with German, and later Ottoman and British help. (The British came into the war in 1919 on Germany's side due to French attacks on British shipping). The war ends in 1921, with the Germans, Brits, Danubians, Ottomans and other allies defeating France, Russia (which goes communist), Spain, and other allies. The US stayed neutral.

After the war, the process of rebuilding the Danube Confederation takes billions of dollars and lots of soul searching. The Hungarians resent having much of their power taken away (Hungary is officially reduced in size, and mostly only contains the Magyar majority areas, similar to OTL Hungary's size), but have a lot of autonomy thanks to their National Assembly.

Emperor Ferdinand is regarded as a hero for reforming the Austro-Hungarian Empire, and in the 1920s matures into a more constitutional monarch, and many of his more extreme views, such as his hatred of Hungarians, has mellowed over the years. His role as Emperor, and the ruling monarch of the Hapsburg Dynasty that formed the empire to begin with, is seen as his greatest strength and his sole source of authority and power, even more than the constitution that was eventually written up. But his death in 1939 (his last words in a medically induced stupor being to his already deceased wife Sophie: "Sophie, please live for our children!") throws the carefully constructed empire into chaos, just as a new, more destructive war is about to break out...

And that's actually about as far as I've gotten with the TL so far.

The flag though took a lot of time to come up with, and was the best of several suggestions made by fellow AltHistory Wikians. The black and yellow are the traditional colours of the Habsburg Monarchy, and the only colours that were believed that most Danubian citizens would be able to accept without favouring one nationality over another. The 10 stars in a circle represent the 10 major nationalities of the Danubian Confederation: Austrian/German, Hungarian, Czech, Slovak, Ukrainian, Croatian, Serbian, Romanian, Polish and Slovenes, with the centre star standing for their unification into one body.

Other versions of the flag had the stars rearranged differently, the off sized tricolour being a try tricolour, or a simple bicolour, and some with a blue strip in the middle between the black and yellow to represent the Danube River that holds the countries together. But most of them were more trial and error versions, and this is the best version that we came up with.


But what do you think? Does the flag make any sense at all for a reformed Austria-Hungary? Or if you have a topic or idea you would like me to talk about, please leave comments below, email me at tbguy1992@gmail.com, or tell me on Twitter @tbguy1992.
Posted by Tyler "tbguy1992" Bugg at 4:24 PM